The Owl and the Pussy Cat Ten Years On

The Owl and the Pussy-Cat Ten Years On

The Owl and the Pussy-Cat ten years on

are in marital bliss it seems:

while Pussy’s out wooing, old Owl is a-cooing,

‘where is that tomcat of my dreams’?

The Owl scowls hard at the moon above

as he shivers alone in his room,

I’m so lonely, come back to me soon,

I’m so lonely, come back to me soon!

Puss thinks not of his owl, he’s out on the prowl

in a dive in the depths of Soho.

He guzzles on nip to loosen his hips,

as he pays for a robin’s bordeaux.

After downing two, they get off in the loo,

then Puss melts in shame for his wrong.

And all gasps as he saw, when he glanced at his paw,

Oh you fairest of owls, I have hurt you most foul, I…’

And the Pussy he loved, he reluctantly shoved

out the door which he slammed as he sobbed.

After months of pining, Ben and Jerry’s and whining

Badger forced him out on a blind date.

One look on this fox, auburn locks and white socks,

he knew he had found his soulmate,

he knew he had found his soulmate. 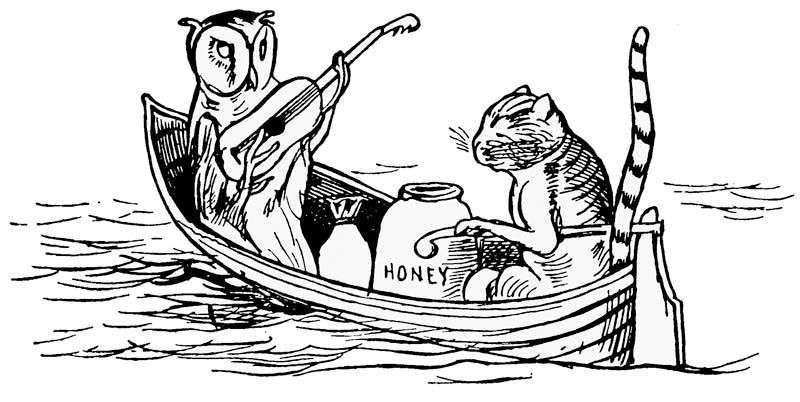